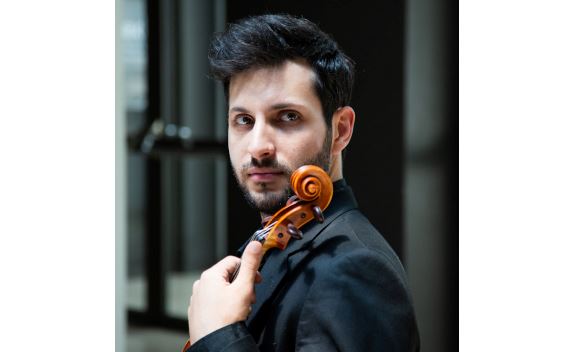 Just before our performance of Mozart's Sinfonia Concertante for viola, violin and orchestra goes out on our Facebook page and YouTube channel, the soloist, our principal violist Ilias Livieratos, speaks about the work, its difficulties and historical background.

What difficulties and challenges does Mozart's Sinfonia Concertante for violin, viola and orchestra present for the performers? How does Mozart's use of the scordatura technique affect both the sound of the viola and its musical conversation with the violin?

One of Mozart's many experiments in this work is instructing the violist to tune their instrument a semitone higher, so that while everyone else is playing in E flat major (a difficult key) the viola is actually playing in the 'easy' key of D major, allowing full use to be made of its open strings.

Mozart did this for three reasons: Firstly, due to its larger size, the viola of Mozart's time was not an easy instrument to play in a virtuoso style; and that is still true today. The use of scordatura makes the soloist's job easier, especially in fast passages. Secondly, although the viola has a beautiful timbre, it cannot cut through the other instruments and make itself heard like the violin can. The scordatura increases the tension of the strings, making it more of a 'primo' instrument and helping its sound to penetrate through the orchestra and compete with the violin.

Finally, it is worth mentioning here that Mozart is known to have played the viola in his quartets, and was very fond of the instrument. Perhaps I'm committing a philosophical sleight of hand here, but knowing that Mozart had recently lost his mother (even though Mozart didn't often write in minor keys, the second movement is heart-breaking), I can't help wondering whether, in the composer's mind, the work was actually a dialogue between himself (the viola) and his mother (the violin), because the element of conversational interplay is key feature of the work. And perhaps the scordatura tells us that he, Mozart, has "changed"? We can't know such things for sure, but Mozart, being a freethinker as well, often hid meanings in his music.

What did you want to convey in your performance, and how far did you succeed?

When I perform music from the classical period (i.e. from around 1750), I always try to have the aesthetic context of the period as a reference point, and create an interpretation that is close to what we call "historically informed performance"—in simple terms, that means playing how we think Mozart himself would have played his music. That whole approach is something I immersed myself in during my years as a music student in Salzburg and Munich.

However, there is a risk that an interpretation of this sort can become academic, which, paradoxically, would make the performance anything but historical, because I simply can't believe that Mozart could ever have played in a boring academic way. That's why I always try to take musical risks and put my "soul" into what I do.

Finally we tried, even though the work is frequently performed, to give our performance something fresh, something new. It was with this in mind that we "sacrilegiously" exchanged Mozart's own cadenza for a more virtuosic and showy—if I may use the term!—passage by the much later Austrian violinist, J. Hellmesberger.