Exactly a year ago, the death of the eminent maestro Karolos Trikolidis, who had graced the podiums of major Greek and foreign orchestras for decades, left our musical world the poorer for his loss. The Athens State Orchestra honours his memory with a performance of the magnificent First Symphony by Bruckner, a composer whose symphonic works the late maestro had studied in depth and performed to acclaim. Iason Keramidis undertakes the solo duties in the premiere performance of the much-anticipated violin concerto by the tirelessly creative Dimitris Papadimitriou, conducted by the internationally acclaimed maestro George Petrou. 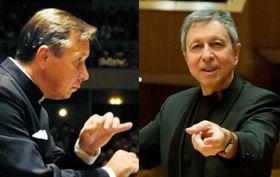 You may doubt that sounds can paint? And yet they can! If you want to ‘see’ an ancient forest deity flirting with beautifu…