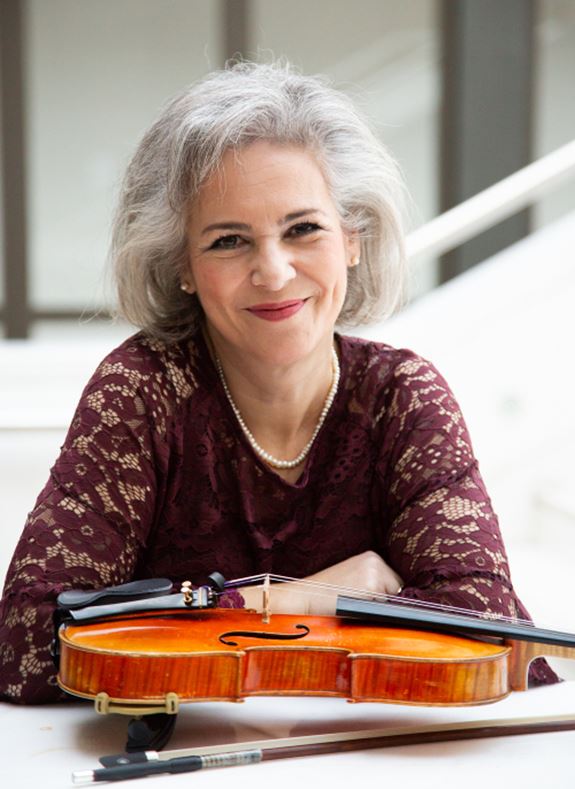 Born in Athens. She studied violin at the Athens Conservatory and at the Royal Academy of Music in London, from which she received the Licentiate of the Royal Academy of Music (LRAM) in 1993 and graduated with the Professional Certificate (soloist diploma) the following year. During her studies in London she had the opportunity to give many recitals at the Academy and to participate in the String Orchestra, the Sinfonia Orchestra, the Symphony Orchestra and the Manson Ensemble. She also attended violin master classes with famous soloists. In 1993 she was assistant violin teacher at the Junior Academy of Music. After her studies she gave several recitals in Athens, Piraeus and other Greek cities.

Marina has been a member of the Athens State Orchestra since 1996. She has also been a member of the National Radio Symphony Orchestra, the Orchestra of Colours, “Enarmonia” Orchestra, the Athens Chamber Orchestra, the Marsyas String Ensemble and other chamber music ensembles. She also served as a professor of violin and chamber music at the "F. Nakas" Conservatory. She has appeared on the Greek television (as presenter of "The World of Music" and "News and Notes") and has collaborated on recordings. She is a member of the piano trio "Callisto", the string trio "Morfes" of Athens State Orchestra, and string quintet “Quintarco” with which she has appeared in many schools and foundations, participating in the Orchestra's educational program titled "Right to Music".