Twenty-seven years have passed since the Athens State Orchestra performed the historic Greek première of the Symphony of a Thousand at the Megaron Athens Concert Hall. Now, Greece's two premier musical institutions are to join forces once again in a true musical ‘extravaganza’ to mark the completion of our Mahler Cycle. And it has to be said that Mahler's Eight Symphony contains elements that are a good deal more impressive than the host of musicians on stage. Most impressive of all is the music’s blazing hymn to Eros, which it approaches as a driving force of life, as Man's only "salvation", as the essence of our communication with God.

Symphony No. 8 in E flat major 'Symphony of a Thousand' for orchestra, 8 voices, 2 mixed choruses and children's chorus 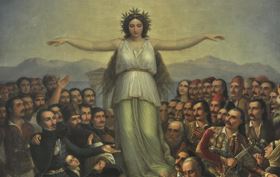 What are the audience of a classical symphonic concert there for? What do we want? Symphonic grandeur and the intellectual…

“There were five of us, friends, and we said we'd go travelling. That we'd take our music and lay it out over time. Near a…

Having recently demonstrated his profound understanding of the particularities of the German repertoire, the German conduc…