A Tribute to Steven Spielberg

Concert within the Athens and Epidaurus Festival

Live music with simultaneous screening of movie clips and photos

Steven Spielberg’s name has been linked to some of our most enjoyable experiences in a movie theatre: who hasn’t had goosebumps while watching Jaws or Schindler’s List? Who hasn’t experienced an adrenaline rush while watching the Indiana Jones movies, Jurassic Park, Gremlins or, more recently, First Man? His movies either as director or producer have also been noted for their memorable movie scores, composed by some of the world’s greatest film composers, including Jerry Goldsmith, Alan Silvestri and above all the great John Williams. The Athens State Orchestra, conducted by the dynamic Indonesian maestro Adrian Prabava, will guide us through the magical world of Spielberg’s films -both his own films and his reminding us some of the most beloved film scores of all time. 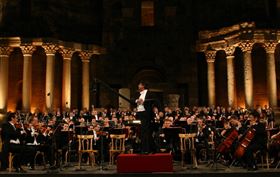 The Roads of Friendship, Athens